We have worked in the past years to increase the climate resilience of small-scale farmers through innovative financial mechanisms. The project encourages investments in ecosystem-based adaptation alternatives, which provide benefits for both families and ecosystems, reduce potential productive losses due to weather events and promote practices that use ecosystems in a more sustainable way.

We work under a multi-stakeholder approach that promotes an integrative vision and a paradigm shift in the way investments are made in small-scale agriculture.

Our partners for climate action:

We support financial institutions (MFIs, Banks, NGOs and cooperatives) to include criteria for sustainability and climate risk management in their policies and procedures.

We provide them with tools, methodologies and technologies, so they can autonomously promote investments oriented towards Ecosystem-based Adaptation (EbA).

We have developed a training of trainers’ program to strengthen the capacity of technical allies on EbA solutions.

We use powerful strategies such as demonstration farms managed by farmers and technical institutions to share knowledge with peers.

Several Financial Institutions have recognized the role of the financial sector in achieving Sustainable Development Goals.

We foster green inclusive finance aimed at generating triple bottom-line returns for investors in a transparent, verifiable and scalable way.

We support Governments in their efforts to mobilize private funding to achieve their climate and sustainable development goals, particularly in increasing resilience of vulnerable communities, ecosystems and ecosystem services.

Agriculture is essential to meet one of the most basic human needs: nourishment. To meet the demand for food in 2050, annual world production of crops and livestock will need to be 60 percent higher than in 20061. Food production depends on several natural resources as soil and biodiversity, and those linked to climate and weather conditions, as rainfall and sunlight.

There is scientific consensus about climate change, as evidenced by the observed increases in mean global air and sea temperatures, extensive melting of glaciers, and an increase in mean sea level2. Climate change has already adversely impacted food security and terrestrial ecosystems, and has contributed to desertification and land degradation in many regions. 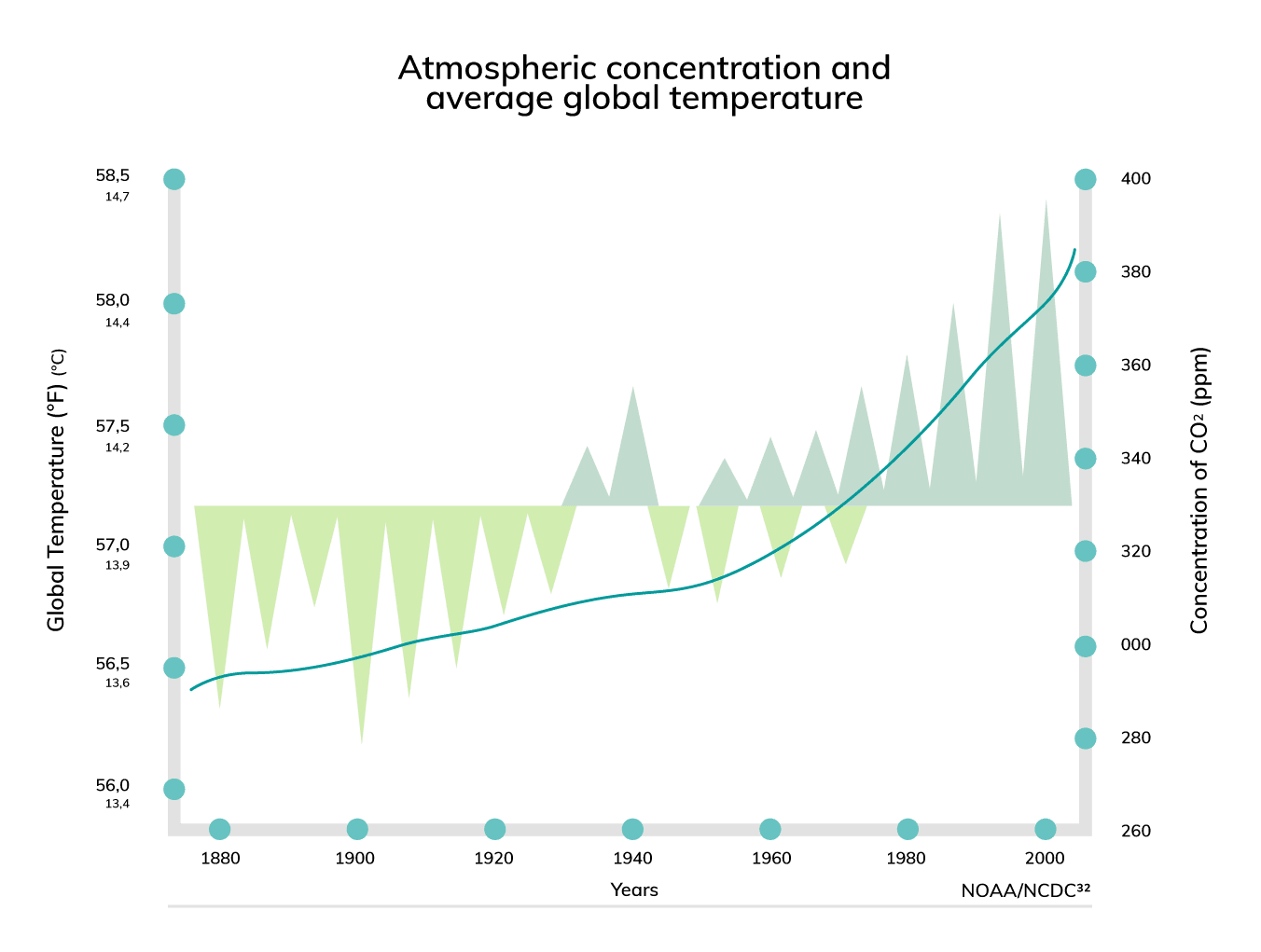 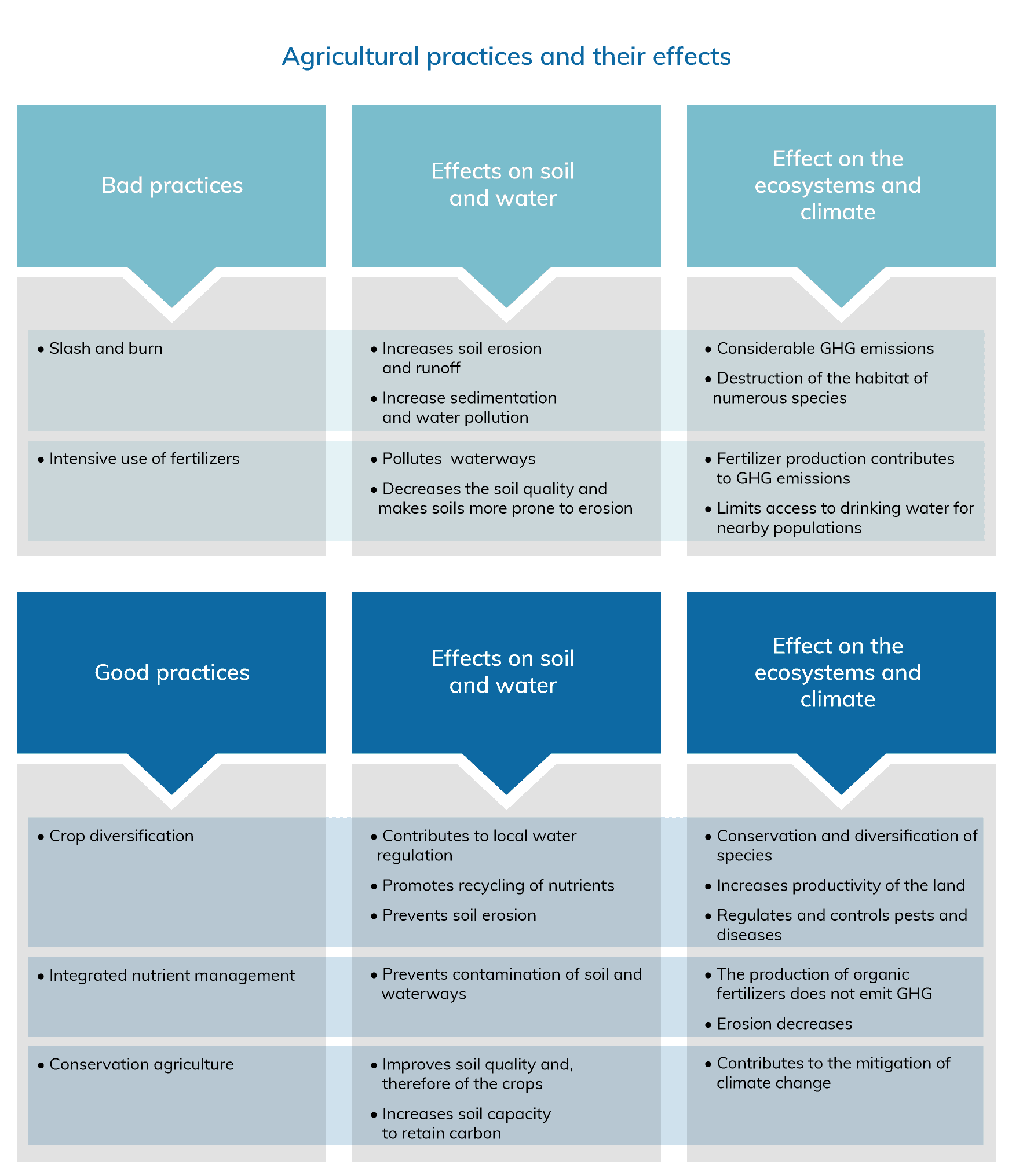 Some of the direct effects of climate change on agriculture are loss of productivity, crop failure, need for greater inputs, landslides, crop damage, spread of pests, phenological changes, erosion, declining water availability, salinization of freshwater, loss of land through sea level rise, among others.

Ability to grow crops and raise animals provides livelihoods for almost 2,5 billion people, including the income for two-thirds of the world’s extremely poor3. Around 83% of the farms in the world have less than 2 hectares, nonetheless, small-scale farmers produce 70% of humanity's food. Climate change impacts on agriculture directly affect already vulnerable rural populations, with far-reaching implications for their food security.

Over the past 50 years, the impact of human activities on ecosystems has been more rapid and extensive than in any comparable period in human history. Croplands cover 12–14% of the global ice-free surface. Agriculture, Forestry and Other Land Use (AFOLU) activities accounted for 23% of total net anthropogenic emissions of GHGs4, during 2007 to 2016.

Agriculture is both a sector that is highly vulnerable to effects due to changes in the climate and the 2nd sector that most contributes to climate change.

Climate change, poverty, hunger and loss of biodiversity are some of the major barriers to reach the Sustainable Development Goals, all of which can be tackled if changes in processes and agricultural practices are encouraged. Solutions developed under the EbA approach have enormous potential to help vulnerable communities to be more resilient to climate-related events and to reduce impacts of agriculture in ecosystems, helping to preserve ecosystem services and avoiding GHG emissions.

Ecosystem-based adaptation (EbA) is defined as the use of biodiversity and ecosystem services as part of an overall adaptation strategy to help people adapt to the adverse effects of climate change (CBD, 2009).

This strategy can be implemented on different scales, from local (e.g. agricultural terraces) to regional and national schemes (e.g. biological corridors and payment for environmental services). Vulnerable communities are the focus of the EbA strategy because they are mostly dependent on healthy ecosystems to sustain their livelihoods. 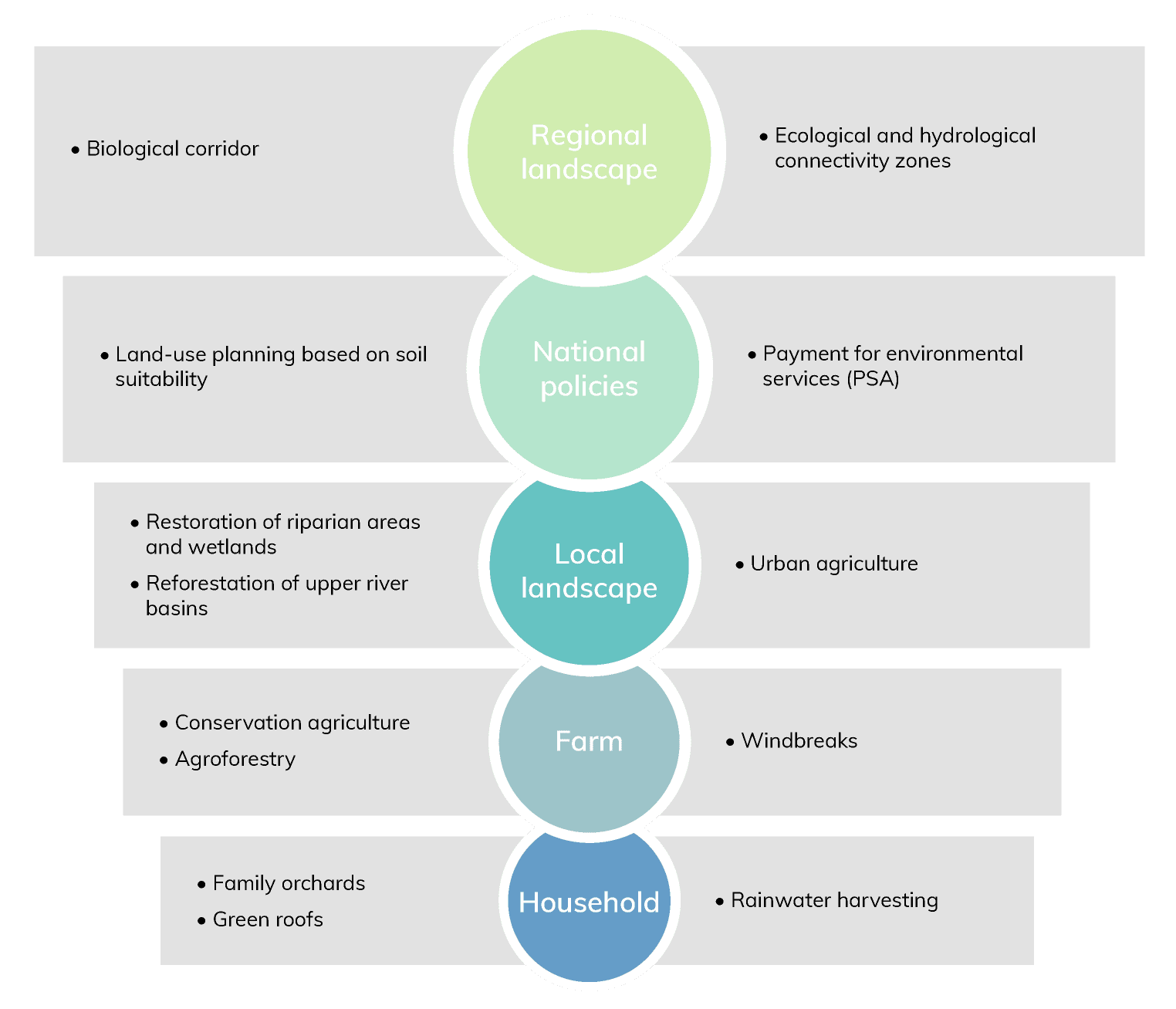 The implementation of EbA measures increases people’s adaptive capacity – in other words, their ability to adjust to climate change, including climate variability and extremes, to moderate potential damages, to take advantage of opportunities, or to cope with the consequences (IPCC 2014). This is achieved through improved practices, climate-resilient technology, income diversification, and sustainable management of ecosystems and their services.

It is recognized that EbA measures are cost-effective, but greater evidence of this is needed. With the provision of EbA options through microfinance, it is expected that many small-scale actions will have a significant large-scale impact.

Since its creation in the late 20th century, microfinance has been viewed as a tool for combating poverty. The concept that gave rise to the microfinance industry was the idea that the provision of small loans to populations with limited resources could help them to raise their socioeconomic level and overcome poverty.

Most of the world’s poor people live in rural areas. In the Latin American and Caribbean region alone, 48.6% of the rural inhabitants are poor5. But, despite the fact that the microfinance sector has developed specialized methodologies to serve this vulnerable population, the credit risks of small agricultural producers as well as the operational costs in remote rural areas are usually very high for the financial sector, leading to insufficient provision of financial services to this segment of the population.

While most rural customers are exposed to climate risks because they depend directly or indirectly on agricultural activities, the analysis of this type of risk is generally not included in the credit assessment methodology of MFIs. Moreover, in order to identify customers’ needs and develop tailor-made products, it is crucial to understand their current situation. This entails identifying which climate risks have most affected the target population in each area of operation, as well as identifying the effects of these risks and potential ways to address them. 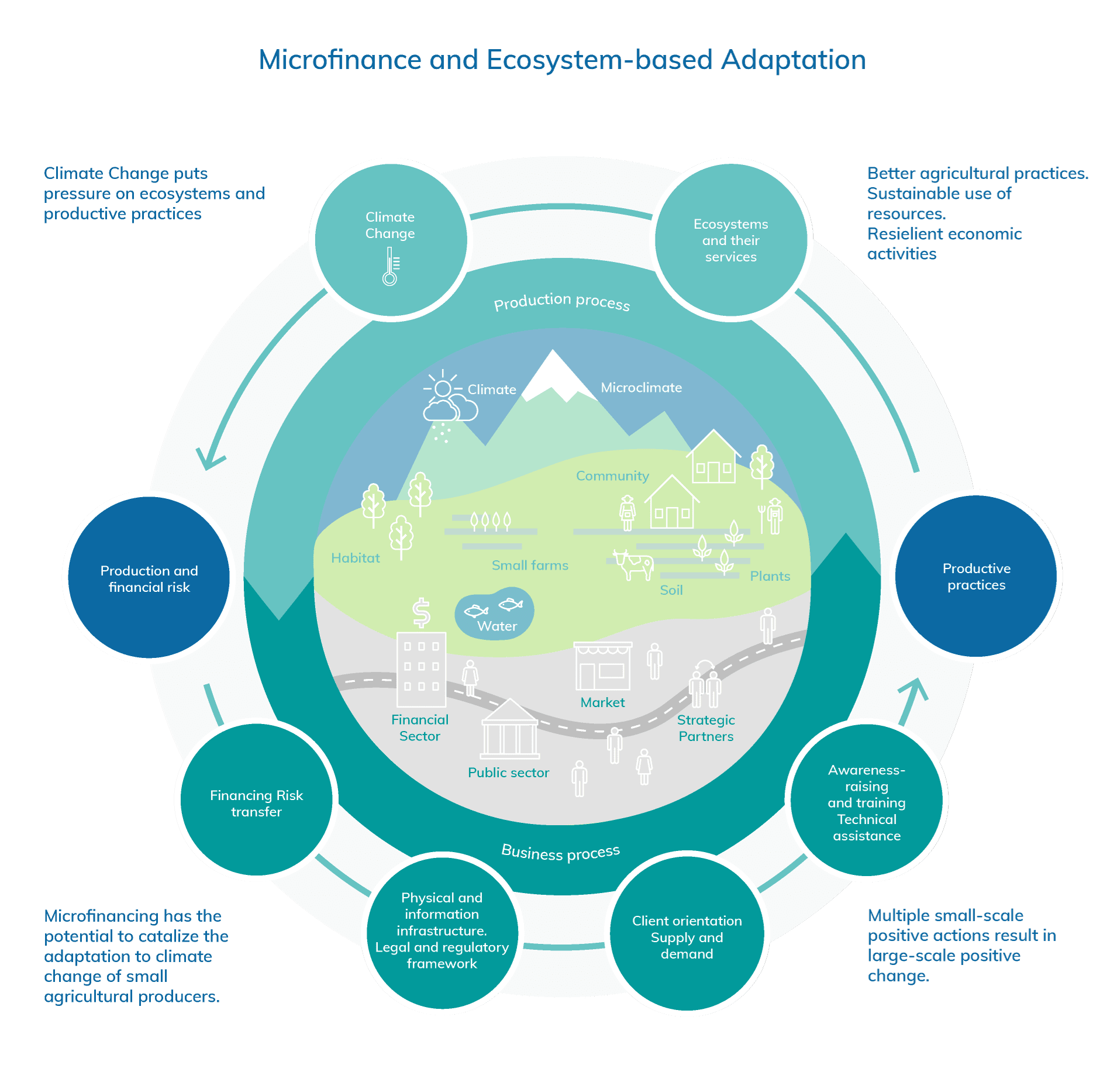 Based on these identified needs, the MEbA project developed its basic approach, which focuses on integrating a better understanding of climate risk variables in the credit methodology of MFIs. On one hand, it seeks to improve financial risk management to increase understanding of the market and thereby increase the incentive to serve it. On the other hand, farmers are presented with options for ecosystem-based adaptation that allow them to reduce their climate and production risks through better agricultural practices, climate-resilient technology, income diversification and maintenance of the ecosystem services that sustain their activities.

Given the nature of microfinance – a high volume of transactions involving small amounts of funds – there is significant potential for the replication of small-scale actions geared to ecosystem-based adaptation, which together can achieve substantial large-scale changes. The promotion of the well-being of ecosystems and the improvement of production practices guarantees a sustainable solution that goes beyond the known borders of the industry.

This website uses cookies to improve your experience while you navigate through the website. Out of these cookies, the cookies that are categorized as necessary are stored on your browser as they are essential for the working of basic functionalities of the website. We also use third-party cookies that help us analyze and understand how you use this website. These cookies will be stored in your browser only with your consent. You also have the option to opt-out of these cookies. But opting out of some of these cookies may have an effect on your browsing experience.
Necessary Always Enabled
Necessary cookies are absolutely essential for the website to function properly. This category only includes cookies that ensures basic functionalities and security features of the website. These cookies do not store any personal information.
Non-necessary
Any cookies that may not be particularly necessary for the website to function and is used specifically to collect user personal data via analytics, ads, other embedded contents are termed as non-necessary cookies. It is mandatory to procure user consent prior to running these cookies on your website.
SAVE & ACCEPT